Shortly before Thanksgiving, my dear 92-year-old husband died under hospice care in our home.

Now I am looking in the rear view mirror at a relationship that started when I was 23 years old and Jim was 42 -– 19 years my senior –– he was already widely recognized as a star yacht racer from San Francisco Bay and an artist destined to be internationally known especially for his yacht racing portraiture. When we met, he was divorced with three children, one of whom was only two years younger than I. I worked for Jim’s partner in his sailmaking business, and I was a student at UC Berkeley.

It’s a miracle we made this relationship work, honestly. Years ago I only half-joked telling Jim, “God laughed when he put us together!” All the archangels protested, wringing their hands. “They’re so different,” they worried, and not just by age. God just smiled and said, “You watch. This will work out just fine.”

The road got really bumpy along the way. We never saw eye-to-eye regarding politics, for example—not even close. I was Berkeley-liberal; he was a pull-yourself-up-by-the-bootstraps conservative. He watched his conservative news programs, which were ludicrous to me. I watched mine. He’d roll his eyes and tell me how uninformed and naive I was. Being highly educated, I refused to take this seriously.

Living in a small San Francisco Bay condo and working around our political divide was a challenge, but we managed. We just didn’t talk politics. I knew he wasn’t stupid or evil, which is how I saw politicians he supported. I finally decided we each see our own slice of the pie clearly and not much else. We’re not omniscient. He has his opinions; I have mine. Neither of us could be absolutely Right or Wrong.

The month before Jim fell ill, I was angry with him for some reason. Really at odds, disconnected. I felt unseen, maybe for a long time. I had started to teach mindfulness meditation in recent years and I loved doing it. But Jim and I had no common ground. He distrusted anything religious, for one thing. And he had no interest in Buddhism or mindfulness or anything related. He knew it helped me, but that’s as far as it went for him.

The anger I felt that day was familiar to me, so, being a meditator, I sat with my feelings without judgment, asking myself what was behind such intense anger. At that moment, I realized I was afraid of his rejection if I revealed more of who I am now, to witness my evolution as I develop my mindfulness teaching practice. True, I wasn’t being seen by him, and he didn’t seem to care what I was doing. But, in fact, this wasn’t so much because of what he did or said, but because I was shutting myself down. I was hiding myself, so as not to rock the boat. Oops…

The next day, as we did every Sunday, we went for breakfast in town at our favorite cafe. I told him I thought of us at a new stage in our relationship, and I had a question for him.

We had achieved our business and career goals long ago. He is still an artist, and I am developing my practice as a mindfulness teacher. We are different in many other ways and we are living two separate lives together. So, I asked, “Eyes wide open, do you still love me, knowing who I am now? Neither of us are going to change, and that’s okay with me. Do you want to marry me again?”

I started to add, “If not, then…” but, he’d already looked at me with all the love one could ask for, and said, “Yes! I want to marry you! I love you no matter what.” And that was it. We fell madly in love all over again, like two people just starting out.

Jim had never worn a wedding ring because of all the sailing we did; he thought it might be dangerous on a boat. But now he suggested we go get him a ring right then and there, in honor of our “remarriage.” And we did. The same as my wedding ring, he picked out a ring with two elements on either side of precious metal. It symbolized each of us having our own life, our own dreams and united by love.

That day we walked out of the jewelry store hand in hand, happy as could be. We told each other we were remarried. We felt no need for a formal ceremony. Best to call it done! We figured we’d celebrate with friends later when the time was right. Unfortunately, that never happened. One month later, almost to the day, Jim fell ill, and then had a stroke. Four months after we remarried, Jim died in our home.

Sometimes it looked like the archangels were right, and all was lost. But, when we reached the very, very end and in hospice, I looked at him, and he looked back, eyes clouded by stroke-fueled dementia, no longer able to speak clearly.

“Let’s just keep loving each other,” I’d say; “It’s more fun that way, and, really, nothing else matters.” He’d squeeze my hand, or maybe reach up and pull me to him. It turned out God was right, and the archangels had to concede; when all was said and done, this relationship had worked out just fine. 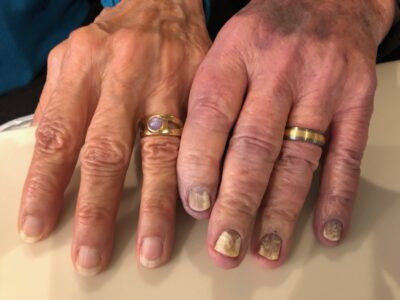 Sallie DeWitt, age 73, lives in Point Richmond, California, north of San Francisco, California. She is an avid hiker, loves dogs and teaches mindfulness meditation. You can join her online group meditation practice Mondays through Fridays at 8:30 a.m. For the Zoom link, email her at [email protected]. You can find her on the web at www.salliedewitt.com.