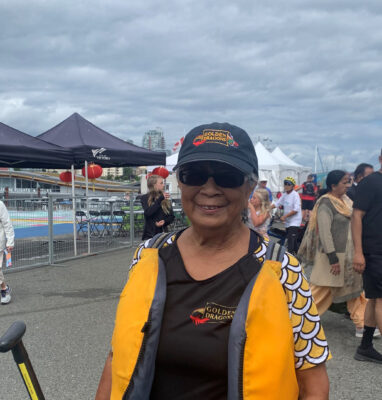 –By Katherine Hough aka Kakalina–

In January of 2023, I will make 74 years young and my 10th year involved in the dragon boat community. But I wasn’t athletic until the age of 63.

I was the oldest of eight kids growing up and I had a lot of responsibilities put on me, so playing sports was out of the question. And I worked the life of a migrant worker in the fields and orchards with my mother’s family until I was 19 years old. Fortunately for me, my father saw the value in education and I was the first in my family to graduate from high school.

Then I spent a life working, raising children and grandchildren and eventually becoming my husband’s caregiver as well.

Never in my wildest dreams would I have ever thought I would embrace the dragon boat world like I have today.  Dragon Boat paddling is a watersport that has a team of 22 people on a very long canoe shaped boat.   It started 2,000 years ago in China and has become world renown, with many races held all over the world.

Dragon Boat paddling completely changed my perspective on my health, my attitude, and love of life.  We moved to Beaverton, Oregon at the end of May of 2011. Our extended family included my husband, our daughter, her boyfriend, four grandchildren, my grandson’s girlfriend, along with three cats and a pet iguana.

It was a good move for all of us.  I give credit to my husband who was almost completely blind because of a surgery, but that’s another long story.

After attending an Oregon Blind Commission meeting in April 2012, he brought home a waiver and asked me to help him fill it out because he was joining a dragon boat team called Sound Waves.

“You’re doing what?” I exclaimed!  I could not believe that he was going to join a dragon boat team. It was a first for both of us. My husband was a fearless man!  Even though we knew what it entailed, we had never participated on a team. That year was the beginning for our family into the athletic world of Dragon Boats and we fell in love with the sport.  He raced in the annual Portland Rose Festival Race on the Kaoschung dragon boats, which are very big, heavy but beautiful, with huge dragon heads and tails. They are only in use for two and a half months in the summer.  My daughter and her 14-year-old son also joined the team. It became a family affair!.

By January of 2013, we both joined a year-round team called Blind Ambition, which is the first blind dragon boat team, started many years ago in the USA.  We practiced and raced with them on the much smaller but faster dragon boats three times a week and did our first out-of-state race in the National Harbor Race in Washington D.C.  But as life has it, his health conditions that he already had wouldn’t let go of him. Tragically, he passed away March 9, 2019.

I found solace and compassion through my fellow teammates from Golden Dragons, a senior team in Portland Oregon.  I started my paddling tenure with them in May of 2014.  I’ve done many races, but the highlight of my paddling passion was when I went with the elite team of Golden Dragons, Women’s Club Crew, to race in the World Championship in Adelaide, Australia in March/April 2016. The competition was pretty intense against other international teams, but we actually placed sixth on the World Record and second in our class! I grew with my Golden Dragons team in many ways, including being a Captain for the Portland Race team for almost six years and took on Race Director for the Goldens before everything shut down due to Covid.

In April of 2021, I moved with my family to Houston, Texas. I had moved in with my youngest daughter and my three grandsons after my husband passed.  It was a big decision for us, a financial decision.  With all of that in mind, I needed to make sure that I could still paddle, for exercise and community.

I was in luck.

I joined a team called Island Warriors and have been with them since our move.

So, now, I’m on two dragon boat teams, Golden Dragons and Island Warriors.  I am so glad the races are back!  This fall I did my first Island Warriors race in Irving, Texas.

Most people are surprised to learn my age.  I exercise and walk almost every day, paddle one to three times a week, try to watch what I eat, and so far, don’t take any prescriptions.

My goal is to continue paddling and racing for as long as Our Lord intends me to. There is nothing like it.

My daughter hung up my team medals on paddles on my paddle wall so I can see it. The fun, excitement, camaraderie, fitness and friendships I’ve made through this whole adventure are immeasurable.  My advice is to stay busy, find something that you love to do and stay with it!

Bio: My birth name is Katherine S. Hough but I prefer to be called by my Hawaiian nickname “Kakalina.” I’m a widow, a grandmother and a great grandmother.  In 2017, I retired from the Girl Scouts organization after 24 years. I’m very active in the community.